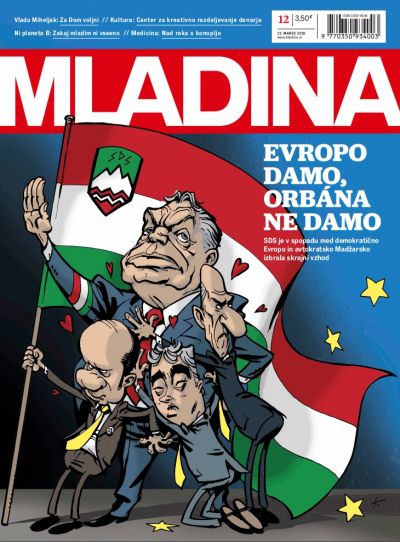 For the past two years journalists of Mladina (which is one of the most influential political magazines in the country) were following Hungarian interference with Slovenian domestic politics and elections. We have written articles on how businessmen related to the Hungarian Prime Minister Viktor Orbán were buying up alt-right media outlets in Slovenia which were partly owned by the Slovenian far-right party SDS, led by politician Janez Janša. On the 22th of March we ran a story about the attempt to expell Orban's party Fidesz from the EPP (European People's Party), which was prevented mainly by the Slovenian members of the EPP. The story was accompanied by the coverpage illustration of Viktor Orbán.

Three days later, on Monday the 25th of March, Hungary delivered a diplomatic note through its Embassy in Ljubljana to the Slovenian foreign ministry, demanding measures against Mladina or other journalists, to "prevent similar incidents to happen in the future". The text of the note verbale, confirmed by the Slovenian foreign ministry was the following: "The Embassy of Hungary has the honour to inform the esteemed Ministry that the Embassy strongly believes that the cover of March 22, 2019 edition of the Mladina weekly exceeds the principles of the freedom of press as well as that of the freedom of expression. The Embassy of Hungary in Ljubljana believes actions are damaging to the otherwise excellent bilateral cooperation. Therefore the Embassy of Hungary in Ljubljana protests by the Ministry of Foreign Affairs of the Republic of Slovenia against the politically irresponsible cover of the Mladina weekly and requests the assistance of the esteemed Ministry to prevent similar incidents to happen in the future."

Slovenian foreign ministry declined the demand and responded that they "strictly respect the freedom of the speech and freedom of the press and would never interfere in any of the media's editorial policy". Nevertheless the pressure from Hungary continued. On the 1st of April the spokesman of the Hungarian government Zoltan Kovacs attacked Mladina in his blog and attacks on our Magazine and journalists continued from the above mentioned alt-right media outlets in Slovenia which are today already owned by the Hungarian state, through the CEPMF (Central European Press and Media Foundation) holding. We believe the attacks and pressure from the Hungarian state unfortunately will not stop.

Below you can find the article about this subject taken from the Slovenian press agency (Slovenska tiskovna agencija, STA) in English.

Ljubljana, 5 April - The weekly Mladina, which put a cartoon of Hungarian Prime Minister Viktor Orbán performing the Nazi salute on its cover two weeks ago, discusses in its latest commentary the Hungarian ambassador asking the Slovenian government to prevent Mladina from portraying Orban in such a way in the future.

The verbal note, which is how such a letter is called in diplomacy, and which was addressed to the Slovenian Foreign Ministry, was "not very diplomatic, but unusually sharp," editor-in-chief Grega Repovž says under the headline Slovenia's Sovereignty Threatened.

"We asked for explanation and confirmation from the ministry, which said that it had received the note. The ministry answered it by saying that it consistently respected the principle of freedom of the press and expression and that it neither interfered in editorial policy of the Slovenian media, nor it assessed it."

Repovž notes that the response of the ministry headed by Miro Cerar was a response "of a serious country - cold and not allowing any debate."

The revealed diplomatic note shows how serious the situation is and who are we dealing with - not only Slovenia, but the entire Europe. "A country which dares to demand from another country's government to act against journalists means a serious security threat to the entire region."

Mladina goes on to say that Hungary is a "country which does not hide that it tries to encroach upon the autonomy of the Slovenian state with capital and all other ways."

With no reservations, Hungary has encroached upon the Slovenian political space and subordinated the opposition Democrats (SDS) of Janez Janša, whose acts have been following Hungarian political interests for quite a while.

"Through the SDS, the Hungarian state has acquired a part of the Slovenian media, which are now associated into a Hungarian national propaganda company. Of course, they represent Hungarian interests and attack the Slovenian state and its institutions."

The Hungarian government also systematically awards citizenship to the residents of the bordering region of Pomurje, makes business investments there and finances social activities. It also wanted to get an outlet to the sea through investing in the port of Koper, Mladina adds.

There are many other examples - for instance a photograph of Ambassador Edit Szilágyiné Bátorfi taken at the embassy in Ljubljana. Behind her is a historical map of a Greater Hungary, in which Pomurje is a part of it.

"They don't even bother concealing their aspirations. No serious country in Europe would tolerate such a shameless and revisionist boasting by a representative of a neighbouring country," concludes the commentary.

Link to the STA article >> 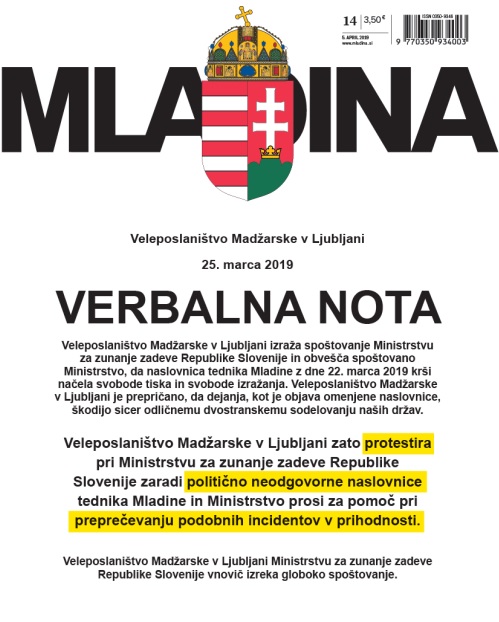